A downloadable game for Windows

A short platformer with a quirky mechanic. made for TigerJ(am) with theme "35".

I liked it, but how do I make it be fullscreen?

Not sure its possible sorry!

I had already saved this game in my bookmarks for some weeks and today is finally the day I had time to recommend it in a short article for our blog. <3 The timing-based puzzle design has been excellently implemented and fits in fantastically with the film frame theme (ludonarrative harmony, anyone?). A nice little game. :) As usual, I also recorded a short playthrough video for it and hope that more people will try it out. Great work! Congratulations to the first place in the jam, by the way. Well deserved. :)

Thanks for playing! Super glad you liked it and happy with all the praise! :D

how do i jump?

Z! Should have indicated it somewhere sorry. it's quite habitual so I hoped people would guess.

I attempted to speed run your game, and I succeeded for the first few levels but after that I would always start to suck. I spent forever perfecting that dab worthy trick though. Great job on your game!

Hahahah loved the video. That level was made for that trick to be possible :D It looked so solid and then everything fell apart in the labyrinth level D: Glad you liked it! Thanks for playing and making the video! ^_^

How much iteration would you say you did before you settled on the game play mechanics you did?

Thanks for playing! Once I settled on "how do I make "35mm film" into a platformer mechanic , Iwas thinking about successive frames, and how "old film" and the fact that things are not "actually" animated, but are just a series of static images that follow each other could be made into a platformer mechanic. I thought about having moving platforms and you being able to control their speed and direction of movement and making puzzles about that, but didn't get very much from that. Stopping parts of the level by taking some sort of photo has already been done. The most iconic thing about 35mm film seemed to be those film strips with the black bars separating frames.

I thought making "realm swaps" slow and with a sweeper would be a good iteration on many games that do the "there are multiple levels at one, but you can onyl see/interact with one of them". Also, the fact that the frames have a forced direction create puzzles that would be extremely trivial if you could swap between frames at will (like the one where you hang from the ceiling).

I wanted to add some buttons that changed the speed of the black bars on stopped them, and make some puzzles out of it, like stopping the bar in a certain position to be able to use platforms from two different frames at the same time. Didn't have time to put it in.

Mostly I iterated a lot before settling on "platformer/35mm film". Had some ideas about making a 2d physics game where you manipulate the shapes of the 3 and the 5 to solve puzzles, a zero-gravity 3d snookers (cause 35 balls make the perfect tethraedron), and some sort of "cooking" game where you run a "photo-developing" shop (also about 35mm film). I was feeling really frustrated about the theme and started kinda late.

Thanks a lot for playing! You have the soothingest voice in the universe, I love how you say "Raindrinker". Best of luck on your YT channel.

A very cool game, I loved the gimmick of the game which felt and looked pretty cool. The style works well and I loved how the theme of the game influenced the world, as it was an old time-y game and the old time-y filter transition sweeps and changes the layout of the stage. I think the concept could be very cool in a full game, but this is already great, so good job.

Thanks a lot and thanks for playing! I'm just not sure if it could be made much bigger cause of all the waiting you need to do, that is tolerable cause it's a short game, but could be very frustrating in a longer version. It's kinda unavoidable also.

Super happy you liked it! I had some more mechanics in the oven, but I ended keeping it simple cause didn't have more time.

A fun & lovely little game! I was a fan of the ending in particular.

The way the frames pass by make it a quite slow-paced platformer, which is a bit perplexing at first, but has its charm & we eventually get used to it. The music contributes to set a relaxed mood :)

Still, some of the harder levels can get frustrating, so maybe making the frames switch faster, or making them controlled by the player would have been more comfortable.

Other than that, how you turned the "getting stuck in walls" thing into an actual mechanic is a great idea.

I also would be interested in reading how you implemented the smooth frame transitions.

Thanks a lot! Yeah, the fact that the game has "letting time pass" as a mechanic has its ups and downs, I think it only works in a short game or it would get very tiresome. I did have the idea of making the speed and direction of the frames to be controlled by the player, and had it almost implemented, but were a tad too many inputs and didn't manage to milk it very much at all.

The implementation of the frames is super super dirty. On one side, the images you see are unrelated to the colliders, and just draw one frame from the left side of the screen until the position of the "sweeper", and then the next frame from the sweeper to the end.

The colliders are made up of vertically thin blocks that whenever their x position is equal to the sweeper position they check if the frame the game is in is the frame they are in. If true, they teleport onto the level, else they just teleport to y = -1000 or something like that.

Thanks for playing and supporting me! :D 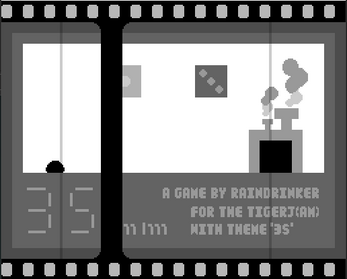